The night was interesting with a bunch of smaller ice floes passing by in something we call in Finland “pea-soup fog”. Of course, icebreaker makes a big difference but during the voyage, it also tries to avoid bigger chunks of ice causing us grey hair while trying to follow the same track. We chose the coastal route for the East Siberian Sea as it seemed to be with less ice. So far that has been the case. Conditions for passing this route are favourable considering the ice but you cannot purely rely on forecasts. Moreover, you have to keep your eyes open in case of icebergs.

Luckily or actually on purpose, the chosen coastal route we are using is quite shallow for bigger ones. Ice forecast is designed to inform how large percentage of the area is covered on ice and what is the type of the ice. Here, the prediction was to encounter 1/10 thick first-year ice and new ice. That means relatively open sea with chunks from last winter and some new ice from this season. We are still following the icebreaker Vaygach and so far we have observed their excellent seamanship and good “customer service”. Conversations, instructions and advice have been clear and true which is not always very common in the shipping industry. Overall, I have been very satisfied with this co-operation.

At the late hours, the escort was finished. According to Russian seafarers' phrase you send “good watch and good luck” greetings to others and in all of its raw beauty, two ships continue their own, separate paths towards the Arctic night. The escort began in fog and it ended in a fog and actually I had to show to the crew from photos how the Vaygach looks like. The best views we got were just her stern for some hours. 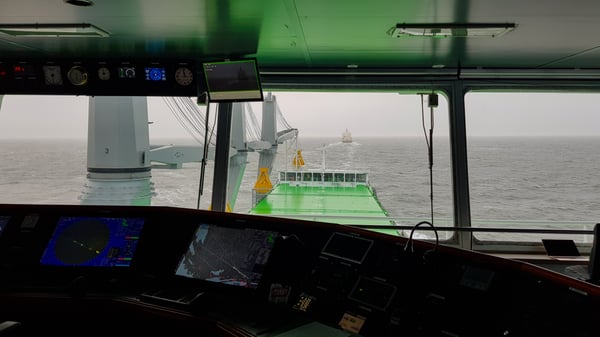